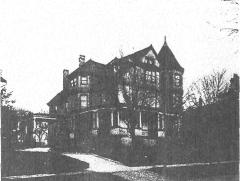 On February 8, 1923, the oganizational meeting of the Woman's City Club of Akron took place at the home of Miss Helen Wolle, who was later elected the Club's first president. Starting in July 1923, the Mason House located at 115 South Union served as the clubhouse until 1926. It was then decided to move to a downtown location. The third floor of the Pythian Temple, 34 South High Street, was leased as a clubhouse. The first meeting in the new location was held on June 30, 1926. A fire destroyed the third floor on June 25, 1929. The fourth floor of the Pythian Temple was leased in September 1929 to handle the Club's growing needs. The clubhouse remained at this location until April 1946. In 1939 the Club was re-incorporated as a non-profit organization and became known as the Akron Woman's City Club. In 2006, the Club was re-incorporated as a charitable nonprofit organization.

On September 19, 1945, the Board of Trustees approved a motion to lease the property known then as the Stadelman Estate or "Gray Lodge" for a period of five years (with the privilege of purchase) from Mr. James Arthur, owner of the property. After a successful financial campaign and membership drive, work began at the Club in March 1946. The official moving date was June 3, 1946. The leadership of then-president Mabel Graham, the vision and exceptional business ability of the Board of Trustees, and the support of the membership brought city-wide recognition to our Club. It truly can be said that - "The beauty of our house is order, The blessing of our house is contentment, The glory of our house is hospitality."

The present home of the Akron Woman's City Club was originally the home of Mr. George Bertram Work and later the George M. Stadelman estate known as "Grey Lodge." The home was built in 1901 with a later addition in 1913, and, over a period of years, other additions have been made.

Under the leadership of Mrs. L. A. Graham, the Club President in 1945, the arrangements for purchase and necessary renovations were made. The purchase price was $30,000, and until the mortgage was fully paid, some $200,000 had been added to the cost for repairs, remodeling, refurnishing and landscaping.

The Club moved into Grey Lodge on June 3, 1946. Five and a half years later, the mortgage was paid off on December 1, 1951, and the Club was debt-free on June 18, 1952. On this date, Mr, Warren E. Carter, President of the Akron Chamber of Commerce, presented a scroll commemorating the accomplishment and expressing the pride of the community for the work the Club was doing. A mortgage-burning ceremony completed the day's celebration.

In 1955, a fire destroyed the kitchen which was located in the area now known as the Parisienne Room. A mortgage for $100,000 was securedn for renovations. The final payment for this new mortgage was made in December 1962 (with the group known as the "Spanish Section" making the last payment of $864.95). A "Mortgage Burning and Tea" feted this important event on January 30, 1963.

There is some doubt as to the exact use of some of the rooms from the original estate, but general ideas as to their function can be surmised. For a period of time, the building was used as a nursing facility and several owners preceded our ownership.

The Ballroom, Crystal Dining Room, Florentine, Terrace, Board, Presidents' Room, and Wolle Lounge form the nucleus of the dining locations, with the smaller Junior, Americana, Rhododendron, and Sun Rooms serving at times for dining and/or meetings. The Gallery, which had been the library, is a fitting place for art displays and small receptions. Members and guests are suitably impressed with these popular locations which have been attractively, as well as practically, decorated and maintained by a staff who care for them lovingly.

The second floor, with its rather formal upper hall decorated with period furniture, serves a number of purposes: dining, meeting, and the core of our business operations. Recent redecoration of some of these rooms (as well as some of those on the first floor) has improved the Clubhouse substantially. The present office area (adjacent to the Wolle Lounge), complete with marble walls, had been the master bath, with the Lounge having been the master bedroom. The Lounge had several closet sections, one which was used as a vault storage for furs, silver, jewelry, and other valuables.

The third floor is presently used for storage (especially holiday decorations used in the Club) and has a section known as the "Playmakers," which has a small stage and has been used for acting lessons and stage productions done by young children of members. There is also an apartment on the third floor which has served as a servants' quarters. (Occasionally in severe weather, Club staff members have stayed here.)

The basement floor of the Clubhouse houses kitchen and dining storage as well as boiler and maintenance rooms.

Let Our Home Be Your Home

A place for friendship, entertainment, education, & philanthropy for over 100 years.